Perhaps you have wondered where the phrase, “tying the knot,” come from? The expression refers to the traditional early Celtic marriage ritual of Handfasting.

“Handfasting,” the ancient word for a wedding, was traditionally recognized as a binding contract of marriage between a man and a woman before weddings became a legal function of the government or a papal responsibility of the church. After the wedding vows and ring exchange, the couple’s hands were bound together with a cord that was tied in a “love knot,” signifying the joining of their lives in a sacred union.

Today, handfasting is a symbolic ceremony to honor a couple’s desire for commitment to each other, and to acknowledge that their lives and their destinies are now bound together. During the Handfasting ceremony, the couple’s hands are tied together with one or several colored cords or ribbons, symbolizing the desire of the couple to be united. The cord is often kept by the couple in a box or ornate bag as a reminder of their vows. Handfastings, done in the past as a commitment for a year and a day, can be combined with ring vows and a license to make it a legally binding contract.

Each of the cord colors has its own special symbolic meaning. The cords can either be several colors twisted into one cord and used for a single cord ceremony, or each color can be draped individually up to six cords. Each cord should be at least 48″ (4 ft.) long, so the ends can all be tied together. For more than two or three colors, ribbon usually works better than cord or rope.

Here are some of the meanings attached to the colors:

In centuries gone by, handfasting was a popular custom in the British Isles. In rural areas, it could be weeks or even months before a clergyman happened to stop by your village, so couples learned to make 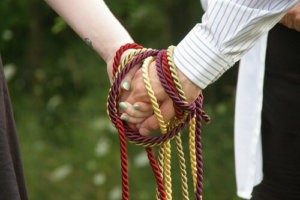 allowances. A handfasting was the equivalent of today’s common-law marriage — a man and woman simply clasped hands and declared themselves married. Generally this was done in the presence of a witness or witnesses. In Scotland, marriages were considered the office of the church until 1560, when marriage became a civil matter rather than a church sacrament. After that time, marriages were divided into “regular” and “irregular” marriages.

At one time, betrothal — the solemn exchange of vows of intention to marry — was as important a step as marriage itself. Some of the ceremony once common in betrothal — such as exchanging rings or a formal kiss — later became part of the marriage service as that progressively became more important.

We don’t know a lot about the rules in Anglo-Saxon England before the Norman Conquest, but the betrothal ceremony seems to have been marked by the happy couple joining hands. It seems that in Northern England and Scotland, handfasting marked a first stage of marriage, a temporary contract that lasted a year and a day. If at the end of that time no child had been born and the couple didn’t want to continue, the betrothal lapsed.

The ceremony’s name has become known again in recent decades because it has been adopted by modern Pagans such as Wiccans. The culmination of the modern ceremony often takes the form of a couple jumping together over a broom, another borrowing from ancient custom. For today’s Pagans, however, the ceremony is marriage, not betrothal. Some even have a complementary divorce rite called handparting!