Blending of the Sands Wedding Ceremony prayer: “Just as these grains of sand can never be separated, our prayer for you today is that your lives together would be longer than the time it would take to separate the individual grains of sand.”

The “Blending of the Sands” ceremony is a beautiful and meaningful alternative to the “Unity Candle” ceremony. Like the Unity Candle, the combining of different colored sands symbolizes the joining of two individuals, and also the joining of their families, as well.  We at Forever, Together – Seattle Wedding Officiants have performed this wedding ritual many, many times and no couple has ever been disappointed that they decided to include it in their Seattle wedding.

The Blending of the Sands Wedding Ceremony, as it’s often called, requires at least two small jars or vases, and one larger one: the two smaller jars from which you’ll pour the sand, and the larger, or “Unity” jar, into which you’ll pour it. 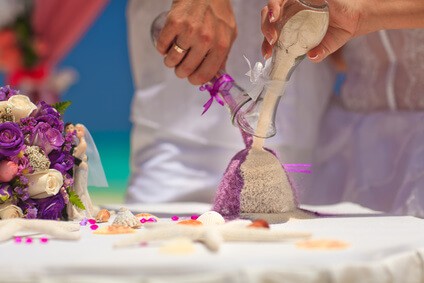 Each of the smaller vials of colored sand symbolizes the separate lives of the bride and groom and their families, and can be used later to display fresh flowers following the wedding. The larger, or “Unity” jar, containing the combined sand, can be put on prominent display in your new home, as a constant reminder of your special day!

If your Blending of the Sands Wedding Ceremony is being performed on a beach, you can also have the wedding Officiant or minister scoop up a little beach sand with a sea shell and pour it into the Unity jar to symbolize the foundation of your new relationship, and also to give you a lovely memento of your wedding by the sea. Sand from the desert, the mountains or a favorite vacation spot can make the pouring ceremony uniquely memorable and personal.

You can buy colored sand at Michael’s, and most other arts and crafts stores.  Small glass jars or vials are usually found there as well. A nice touch is to pour the colored sands into a small “heart-shaped” bottle. Later, you can melt some wax over the top of the combined sands to seal and hold the sand in place, and cover it with a cork or lid. You can even have your names, wedding date, or any other information etched in the Unity jar prior to the ceremony.

After the wedding Officiant or wedding minister reads the appropriate ceremony text (or any text you prefer), you and your partner pour your two jars of sand into the Unity jar. You can do this all at once, or take turns. The more turns you each take, the more layers of colored sand build up in the Unity jar and the more beautiful the keepsake. It is also traditional, though not required, to leave a small amount of sand in each individual jar to signify that, although you are now joined as one, you are each still free to express your own personalities. The combined sand makes a wonderful wedding “souvenir,” and a beautiful reminder of the promises you made on your wedding day.

If you would like to include friends or family members in the sand ceremony, just purchase as many extra jars and additional colors of sand as you need. The number of people you include in the ritual is limited only by the number of jars you want to buy. As non-denominational wedding Officiants, We have seen the Sand Ceremony incorporated into virtually every possible type of ceremony, from the most traditional to the most eclectic, and we’ve performed it with as many as 12 couples participating. If you have the room, the more, the merrier!